So it turns out I was right to be nervous about my knee!It’s been an interesting day on the joints front. The knee pain setting off this morning was pretty bad, it was enough to keep my quiet for the first leg as I got used to it! Maybe no more hills for a while ey?Saying that the weather was once again stunning and the roads were glorious for the majority of the morning as we headed up the west coast of North Uist to the nature reserve for lunch.Callum and I seem to be the most social of the bunch as we keep finding ourselves lagging behind the group in conversation with others, the amount of Yorkshire folk we’ve met this trip has been ridiculous! And today we met a lovely guy from Halifax who was cycling the east coast planning to reach the same point this evening as we were.We had lunch at a gorgeous beach at the reserve and then, as we obviously haven’t been doing much exercise this week, we ended up doing some kind of beach Olympics, having long jump competitions and the boys having sprint races through the sand 🙂 I didnt really want to leave, especially as this was when we said goodbye to Briony and Karl as they headed back down south and we headed north to Burnaray.We found a breezy but very flat area to camp on the north east side of the island, and once again I was goosed!After a double dinner and Edward picking up some beers for us we headed over to the west coast to the beach for sunset.We didn’t even have panniers on but 2 hills in I decided my knees and body needed a rest so I retreated back to the tents.Free from the boys for a while (for the first time in 3 weeks I think!) I sat out on my mattress with a book, some Leonard Cohen and David Gray, a beer, a banana, and a sky lit up in pink and orange as the sun set over the hill. I’m sure the boys had a better view from the beach (they promised me pictures!) but I was pretty content with my spot. The sky was beautiful.Finally some goons on bikes headed over the dunes and my sanctuary was ruined! 😛The guys appeared and chilled outside with me for a while until we all realised that actually it was pretty cold and we wanted to be in bed.So back in the tent, a few of the guys are still out having some wine that we think came from Jaz’s farm?Tomorrow Gregor, Cal and I are splitting from the others and getting the ferry to Harris as we have a slightly tighter schedule than the others. I think we’re gonna head to a cafe and the others will see us off! And then it’s back to the three of us again, we’ve got a day and a half to cross south harris reaching Tarbet for a ferry on friday afternoon, its only 40(ish!)km so with luck we can have a very relaxed few days – though the weather may not allow this! Lots of rain, humidity and sadness is the current forecast! 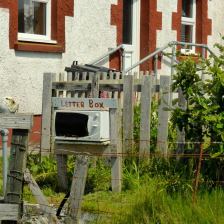