The 7 hour coach to Penang was easy enough, we got dropped off on the mainland and managed to catch a ferry at sunset over to the island, picking up a lost traveller on the way -Andreas.

As we were only here one night then off into the jungle we had booked our hostel simply on price and air con. Bit of a mistake.
Turns out this hostel is a bit of a party hostel, which is fine, but the owners seem adamant that you join them, and just a bit funny about things. The people staying there were all lovely, a lot were 18 and they were nearly all travelling in a very different way. Most of them were here to drink and go to the beach and not so interested in where they were – which is fine but it meant there was little we had to talk about and though they were lovely enough to invite us out for dinner, they headed straight for the western food and didn’t take any notice of anything local really.
These guys were the most welcoming bunch ever. Like I said, they straight away invited us to join them for dinner, everyone we passed asked if we were heading out that evening, everyone was chatty and kind. And everyone was from Scotland? There was a large group of people from Edinburgh, as well as two girls from Forrest (apparently I was the first person to know where this was!) who were planning to move out to Penang to start their own seafood resteraunt!

We went for a wonder round little India, managed to did a cool shop an then spend hours wondering in circles trying to find it again (turns out it was closed) and then joined the rest of the hostel for a night out. Like I said, the hostel owner was a tad unusual, not in a dangerous way, just we didnt really want to hang around with him, but the club was quite interesting, there was a phillipino band playing American pop music (really well) and they were just having a ball, so we were happy. We spent most of the night dancing with Claire, an 18 year old girl travelling through Asia on her own as the girl she was travelling with ditched her a week in!! And Andreas, who was from everywhere, most recently Korea where he had been teaching English.

It was quite funny to me how quickly I began to feel protective (not sure thats the right word) for Claire, she was 18, had a few drinks and Rachel and I spent most of the night with here keeping the local guys at a distance probably further than necessary and went home with her. It’s exactly what people did for me in South America once people learnt my age, especially one girl I called Panamar, who just joined me for days, no fuss, and not patronising, but was always there and I completely get why now!

Once we got to bed I stayed up for a bit chatting to people, and Rach headed to bed, but when I went to bed I found Rach sat there with articles on Bed Bugs and covered in deet. All the walls were covered in bed bug marks, they were coming out of the sockets! We killed all the ones we could see and curled up on our Arniwear as the other people in the dorm explained how two girls got covered in bites only 2 nights before and the hostel owner basically was doing nothing!haha yay.

Luckily I got no bites (thank you Arnywear) an Rach only had 1 but we were happy to leave the next morning and we’re not going back!

Today we’re meeting with Ang, a couch surfer who is letting us stay in his jungle house for yoga, meditation and help in the local home for people with disabilities, we dont really know what to expect but it sounds interesting! 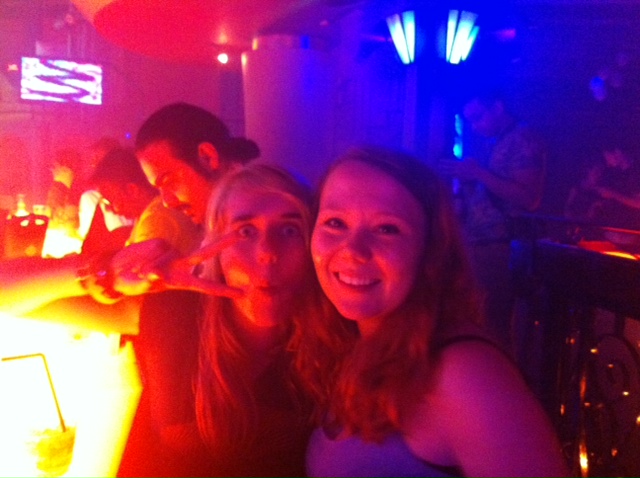