We took a night bus over to the perhentians, a night minibus actually, and unfortunately didnt get too much sleep as we kept falling off our seats on every corner! Arriving in Kuala Besut at 4am we had 4 hours until out ferry and napped on the benches outside until we could head over! The speed boat over was awesome, I love the feeling of flying over the waves, a bit like a roller coaster apart from theres a small thought in the back of your head reminding you there are no safety rails! I was grinning non stop for the 30 minute ride as the sun rose in the sky over the islands.

Arriving at around 10am we made our way to the hostel at the end of the beach (Long Beach) and we’re told that they would not know for they had any spaces until 11, but we could leave our bags here and go search for a hostel. Nearly everyone said wait till 11 and everybody here was so relaxed about recommending other hostels. There was obviously no competition here. They knew they would have a full house by the end of the night.

We ended up finding a 2 bed room from MR20 each a night! (Thats cheap for an island!) and dumped our stuff and headed to the beach.

The Perhentians are beautiful. Clear blue water, beautiful white sandy beaches, not a cloud in the sky. Everybody on the island is so relaxed, wondering around at a snails pace, cheery and kind to everyone. We saw a few tourists upset with the speed of service at a cafe (my breakfast appeared in stages over 2 hours) but i you just join in with the locals attitude then this place is great and so chilled!

We decided that this was our first day here (hoping to spend 3 nights) and it would be foolish to go out in the sun, even though it was 11am the sand was already burning! So we found an umbrella, the biggest we could, covering us both completely and just read and relaxed.

Though I don’t read much at home, I went straight back into my travelling habit here and found myself an awesome trilogy to work through. The Century Trilogy. Each book works through one of the three main wars of the 20th century, from perspectives of fictional characters from all countries and walks of lives, as you can imagine their paths all cross and it’s an unbelievably gripping read. (I blame the book for my slow blog posts!)

Anyway, after a few hours in the shade a friend looked over and told us we were burning! We hadn’t been in the sun all day, had been re applying sun block all day but I had a burnt back and a few hours later rachels burn appeared. Mine went down fairly quickly, but Rachel became very red with her Scottish skin not handling this climate at all!

So we headed inside a cafe, all buildings were just a roof and no where was hidden entirely from the sun but our room which became a sauna as soon as the electricity and fan turned of at 7am!

Once the sun had set we dared to stand outside and strolled up and down the beach, slowly and in pain, and after dinner found ourselves at a fire show. The majority of the fire throwers were foreigners who had move out here for a few months, as a few locals who could do crazy things with fire sticks and balls!

Every so often the fire was dropped and once a ball went flying into the shop next door at chick point locals came running over to put it out before it set fire to their store! The power also kept going out but to be honest it looked pretty cool in pitch black with no music!

The next morning we headed to a cafe after the electricity went out and managed to make brekfast last till 3pm staying in the best shade we could find. The plan had been to go snorkelling, but that would have been a pretty dumb thing to do when already burnt so we relaxed, and met some people who worked in the dive centre up the beach. Two of the guys were teachers, one in holland, the other a maths teacher in london! So straight away we got on, I was interrogating them about teaching and travelling and it became clear quickly that these were the kind of teachers I wanted to be, passionate about their subjects and their students, taking all travel opportunities. They were living the life I would like to live in 10 years time.

As rach is burnt and we’re low on money from buying more aloe vera we’ve decided to cut our time here short and head to the cool hills of the cameron highlands, we’re hoping that this will help the burn settle and we can relax outside of a sauna! 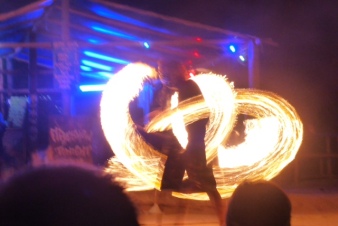